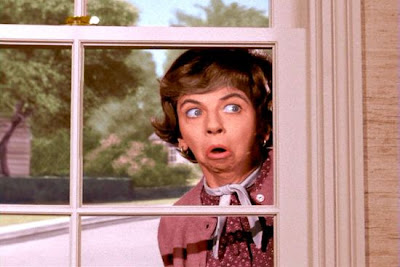 Well, after being vacant for almost three years, someone finally bought the house next to ours.  I must admit, I was rather enjoying the privacy and the peace and quiet that came from having an empty house next door.   We were actually making merry on New Year's Eve with our company when we noticed we were being watched......the new neighbors moved in that very night...the last night of the last year and well, with no curtains on their windows or electricity to watch their television with...we were the next best thing to quality entertainment that they could get.  I don't mean they were maybe watching us, they were full on standing-in-their-house-looking-in-ours watching us.

I am very happy the house next door now has an owner but at the same time I like to walk around in my pajamas and yesterday's hair-do.....and this house backs up very close to mine with full view of our entire living area.  I now had to ponder my curtain-less kitchen window that faces their huge living room picture window...it's bad enough they've probably already seen me go out into the backyard in my bathrobe about a dozen times already, but I guess if you dare to venture outside in your night clothes that's a chance you have to take.....inside my house was a different story.

So, many of you know how frugal I am...after all, I made a curtain rod out of a tree branch for my livingroom curtains.  I already had a nice Waverly toile valance on the top of my kitchen window (Goodwill) but I needed some privacy on the bottom half of the window without blocking out all the daylight...so my daughter and I ventured out to Goodwill where she found a few yards of a complimentary black toile fabric.  I cut a section of fabric and hung it by curtain clips onto a tension rod and below is the result. 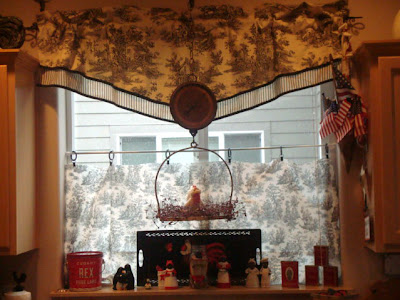 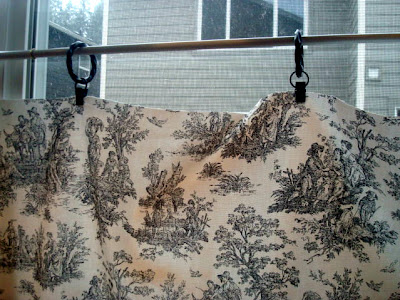 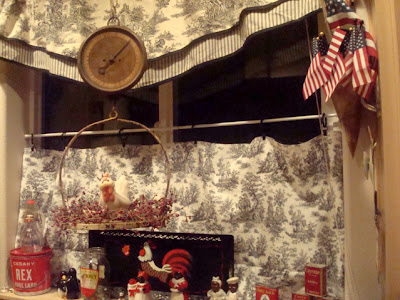 I didn't hem it...not one single stitch was sewn, I just cut and hung and taadaa...that's it. My kind of decorating...cheap and easy.  You can see how close the house next door is, we live in like a horseshoe...where our house is right on the bend and their's is on the side of us so the rear of their house backs up to the side of ours.

Also, after we lost Sadie I told my husband that it would be a very long time before I considered another dog and I would certainly never get a puppy.  I was so caught up in my own grief and trying to get through each day that I really wasn't aware of how losing Sadie was affecting someone else in my household.  People grieve differently and although I was doing a pretty good job coping with it, someone else was not.  As parents, we made a decision that we hoped would help the healing process. 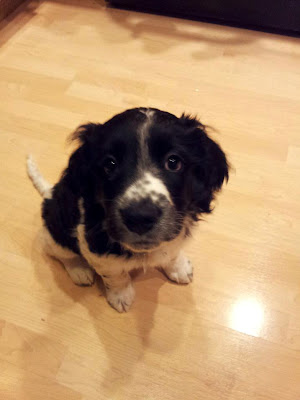 This is Walter and he is the newest member of the Bittersweet family.  He is not my dog...I had mine and she will be forever in my heart, Walter belongs to another and he is fitting right in. 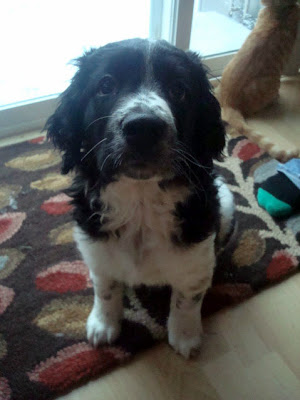 Walter is a English Springer Spaniel mix and is almost 3 months old....and already has a new BFF....actually I think it's the cat who found a new BFF.  Simba mourned Sadie for quite a while...he would walk around the house whining looking for her...it was very difficult to watch, and it took him a while to realize she was gone.  Simba and Walter are now besties and they love to play with each other.  The other two cats tolerate Walter but Simba finally has a playmate again. 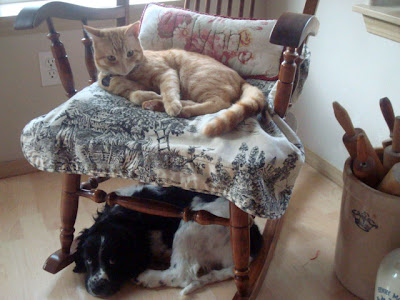 I hope you are all having a very Blessed start to the New Year...we got some snow today and some got to see it for the first time ever..... 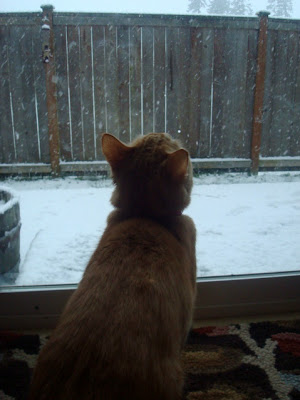 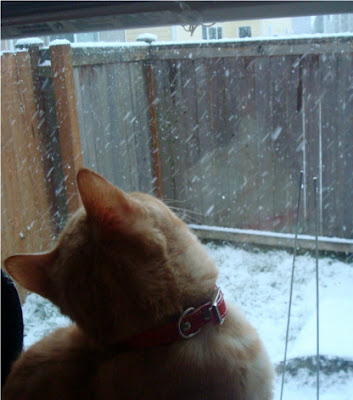 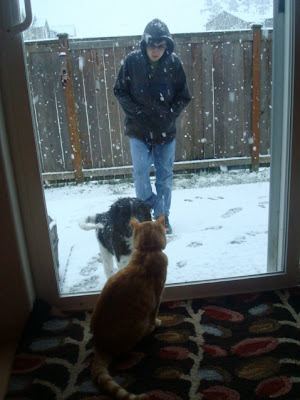 It's finally starting to feel like Winter here.  I hope you all have a great week! 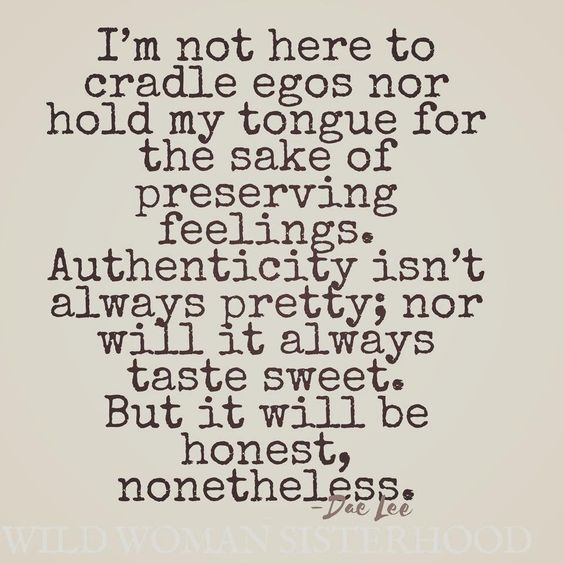 In memory of Deena Warner

After having my little blog be hijacked by an influx of spammers from overseas and having to delete a ton of spam...I now read all comments before they go public. I hope you understand. 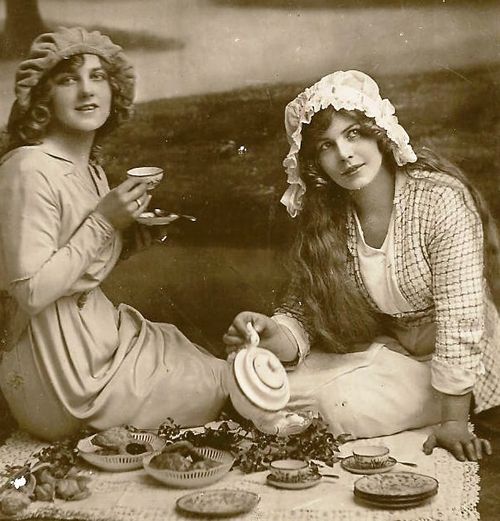 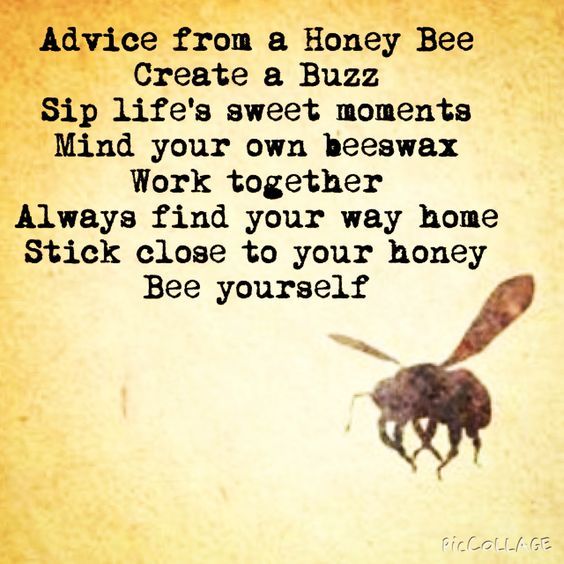 I just thought I'd give you a peek into one small part of my bedroom....this space includes a vintage dresser that I repainted and adorn... 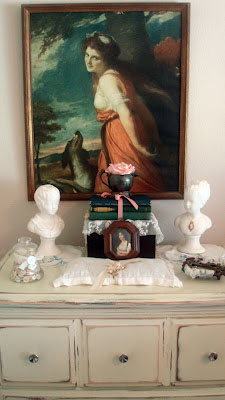